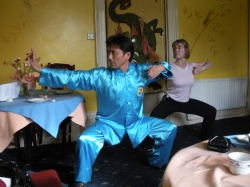 What is Qigong (Chi Kung)

Qi gong (pronounced chee-gong) is an ancient Chinese system of breathing control and physical exercise which can have a relaxing and meditative effect whilst giving a good stretch.  Great for releasing stress and anxiety.

Gong = practice ...so Qigong is a type of energy practice.

NEVER HEARD OF QIGONG? Come along and try it for yourself.

Qigong classes restarting on a Thursday morning from 15 September 2022. 10-11am.
VENUE: KBT ACADEMY, 16 Upland Road, Bexleyheath DA7 4NR
Places available - contact us to book your place.
£84 for 12 weeks excluding half-term (27 October) - discounted for advance payment, normally £108).
Please note: to enable continuity and maximise the benefits of Qigong, we are unable to offer pay as you go classes.


Qigong for Health, Relaxation and Healing
There are many different types of Qigong but the types taught initially in our classes are particularly good for health, relaxation and healing. Like all things, this takes practice but even within a short period of time, people do start to feel the benefits.

The slow and graceful body movements of Qigong are similar to Tai Chi and help to regulate the breathing in a natural way improving balance, flexibility and muscle strength. Qigong exercises improve the flow of qi (internal energy) around the body, remove blockages of stagnated energy and in so doing can improve overall health.

Qigong can shorten the recovery phase from long-term illness and both Tai chi and Qigong can ease the transition after injury back into exercise due to the low-impact and slow moving nature of the exercises. It is also particularly good for people who may not have exercised for some time as the movements are easily adapted to suit individual abilities yet they still strengthen the joints and muscles without unnecessary exertion.

There is a wealth of positive information on the internet showing the results of research into Qigong for those who wish to know more.

Read all about it on our blog page.

Rhonda has previously taught classes at the Adult Education College in Bexley / The Learning Centre Bexley.

Rhonda has practised Qigong throughout her 20+ years of Tai chi training. She was the first person in the UK to be assessed by the Chinese Health Qigong Association passing formal examinations to become a recognised instructor in Ba Duan Jin (2008) and Yi Jin Jing (2009). 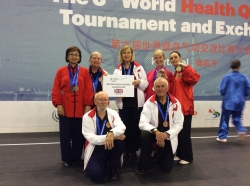 For further information or to book a place in one of our classes, please do not hesitate to contact Rhonda on 07985 001782 or by sending an e-mail using the 'Contact Us' page of our website.

During the last 26 years, Rhonda Bailey at Abundant Energy has developed and expanded her personal interests in Tai Chi and Qigong leading to an interest in energy cultivation techniques.

If you would like to book a course or workshop with us, please complete the details in the box below and pay via PayPal. OR email us for a booking form and details of alternative payment methods.

We left Shanghai early morning and headed to the beautiful town of ZhouZhuang complete with canals like a mini Chinese Venice! It was good to relax and meander along the narrow streets of this traditional water town.
Check out more of our blogs.